I woke up from a nightmare at around 2 am on August 19. I dreamed I was following a young woman, a redhead, who was telling me about a serial killer who had slain several young women. In the dream, I was both witness and participant. I could see that the killer was a 20-something, white male in jeans and white t-shirt whose face was painted with a mime-like mask of white makeup; he had close-cropped, blond hair, and looked a bit like a skinhead.

I’m almost certain my loud neighbor, Rob, inspired the image. I regularly wake up to the sounds of his loud voice in inane conversations with his marijuana-smoking, cancer-ravaged mother, the gist of which I can follow without trying, whether I want to or not. If his voice doesn’t wake me, the power tools he uses early in the morning will: a mower, a snow blower, the occasional smashing of scrap metal (with a sledgehammer? A cinder block?).

In my dream, I walk with my female counterpart through the dark corridors of a cavernous house, maybe some kind of industrial space. With her telling of each murder, I see a flashback of the killings in my mind’s eye, somewhat abstracted and  fast, but deadly all the same. Eventually, my redheaded companion leads me up a flight of wooden stairs. The space is dark, the wood of the steps stained almost black. At the top of the stairs, she reaches a door, a door I’m certain she will be killed upon opening. I wake up, terrified.

I’m alone on the bed but for my cat stretched out next to me; my awareness of him is a comfort. My home was formerly a grocery store, the storefront portion of which now functions as a studio for my sculpture work. Upstairs from my studio is a three-bedroom apartment I use for my living space. Immediately following my dream, I find myself very conscious of the sculpture I installed the evening before. I feel aware of evil, for the first time, as a force outside of any particular action — it’s irrational, but palpable and present in that moment.

For months, I have been purchasing erosion control tubes, geo-textiles, straw wattles, and coconut coir logs. These are products used to control the erosion of riverbanks and land that has been stripped of vegetation in the aftermath of a construction project. Though the materials are organic, the conical shape of the tubes has a distinctly manufactured appearance. Moreover, the organic material used inside these systems has been “cleaned” of any alien species so as not introduce unwanted seeds into the landscape, leaving them sterile containers with the functionality of water absorption and soil enrichment. Out of context, they are comical to look at: the large coir logs filled with coconut fiber look like giant cigars; the skinny geo-logs, made of white mesh filled with shaved wood, look like something extruded, like a long, fiber-rich cylinder of excrement, hanging awkwardly from the ceiling of my studio.

But I want to tell you about the straw wattles. They are made of black mesh, similar to fishnet stockings but made of biodegradable plastic, filled with sterilized straw. I have covered one of these wattles with roofing tar to enhance the wattles’ semi-natural, vaguely polluting aspect. The plastic mesh is much slower to decompose than the straw, which results in the large tumbleweeds of plastic mesh you can find collecting at the edge of highways and other construction sites. I eventually moved the tar-covered, 9-inch by 10-foot wattle to my garage, where it began to mold. At which time, I decided it had to go, so I dismembered it and bagged the straw for composting. Upon tearing the wattle apart, I was left with the two hollow ends where the mesh is tied to close the wattle, like a do-rag. Straw clung to the mesh where the tar had touched the straw, even as the rest of the loose straw fell out. When I picked up the ends (about 26 inches long) of these deconstructed wattles and held them up, they struck me as suggestive of the hoods used on war detainees at Abu Ghraib, or by the KKK, or like the heads of emptied scarecrows. I’m interested in humanity’s contribution to global warming by mass-producing objects that pollute while simultaneously attempting to “correct” the destruction of the earth. The decapitated wattle seems to me like a human trophy in our war with the Earth.

Months later, I recreate the same process I’d stumbled upon with the wattles, this time using wax to achieve a version burned out of a ceramic shell and cast in bronze.  My nightmare happens the day after I retrieved the bronze “hood” from the foundry.  To facilitate the patination process, we’d propped a steel pipe inside a metal bucket and stabilized the pipe with pieces of firebrick, so that the sides of the bronze could be alternately swiped with a jet of propane flame and brushed with a copper-rich solution. Back in my studio, I hang the bronze “hood” from the ceiling with a tar-covered rope and fix a spotlight on it, so that it casts a dramatic shadow on the adjacent wall.

As I work, I find myself thinking of the ouroboros  (specifically, a tattoo version on a lover’s neck), that ancient symbol of a snake eating its tail, signifying the cycle of life and death (among other dyads). I feel the need to fashion one out of a long straw wattle. Doing a bit of research for the piece, I read — of Plato’s Demiurge, the origin of the stake, vampires, and poor, 19-year-old Mercy Brown, an alleged vampire whose heart was removed two months after her death and burned to ash in 1892 to prevent her resurrection as one of the undead. I am not a fan of horror, vampire-films, or haunted basements, the only exceptions to that rule being George Romero’s Night of the Living Dead and Dawn of the Dead (the latter mainly because it ridicules the hedonistic capitalism of shopping malls and America). But the bronze hood leads me down this unusual path. Curator Johanna Burton comes by for a studio visit; she notes the equivalent of Monet’s haystacks in my coir logs and suggests I may be interested in object-oriented ontology, which leads me to read Vibrant Matter: A Political Ecology of Things by Jane Bennett. Bennett argues that agency emerges as the effect of ad hoc configurations of human and nonhuman forces. After purchasing another straw wattle from Brock White, I place it on my studio floor, directly below the hanging bronze hood; I arrange the wattle in the form of a closed circle. I’m increasingly aware of the ritual inherent in my arrangement of the piece. Associations with global warming, end-of-times/end-of-man, epoch of the Anthropocene — it all seems to coalesce as I work.

Offerings on the lava flow near Hawaii’s Kilauea volcano. Photo courtesy of the author.

I spend the evening printing images from a trip to Hawaii’s Kilauea volcano. I had traveled there specifically to document the active lava that was encroaching on the town of Pahoa. By the time I arrived the lava had cooled, though below the top crust it can remain molten.  Orange safety fencing had been installed to keep visitors from the solid river of lava, though it become a threshold of contact and a ready armature, for fresh leis, handcrafted beads, woven bracelets, and other offerings. I wasn’t sure if these items were indicative of local Hawaiian custom or the work of tourists mimicking the idea of a traditional gift to Pele. Looking into the matter, I stumbled on a 2007 article in the Los Angeles Times, “Offerings to Hawaiian fire goddess attracting pests,” reporting how rangers had to remove about 45 pounds of offerings (flowers, bottles, money, incense, candles, crystals and food) from Halemaumau Crater each week.

Since I’ve had the option to choose such things for myself as an adult, I have lived as a secularist. My mother is a devout Catholic, and her moralistic version of good and evil turned me off religion more profoundly than if I had been raised by hippie Marxists. My outlook on religion and all things mystical has, as a result, been that of the skeptic.  At my most generous, I acknowledge that others can embrace a whole range of belief systems and find something positive and life-affirming in such devotion, but when it comes to religion and ritual my analytical reflex muscle kicks in out of habit—a self-preservation tactic I picked up as a young person. I emigrated from Argentina at the age of ten and grew up in Missouri, the “Show Me State.” In my life, cultural relativity met practicality in a way that effectively discouraged any conscious indulgence of fantasy or mysticism.

Here is the story I mean to tell: The night in question, I woke abruptly at 2 am, feeling scared from a run-of-the-mill nightmare about a serial killer. I awakened to find my cat lying next to me. What was unusual was the uncharacteristically irrational fear I felt upon waking, as if I sensed an evil force in the studio below me. I knew what was actually there in the dark: a bronze hood suspended from the ceiling with a straw wattle in the shape of an ouroboros directly below it.

My bedroom opens onto the landing of the stairs to the studio, and my bedroom door was ajar, as was the studio door, so not only did I sense a malignant presence in the space below, I felt sure whatever force was down there could move freely. I sat and listened. I heard nothing out of the ordinary to confirm my fear, but the sense of menace was persistent, palpable. I recalled the Demiurge I’d been reading about, the antagonistic maker/controller of the material world who is eternal and uncreated, much as the material from which it fashions the universe. Huddled, frightened in my bedroom, I felt like a two-bit Pygmalion, but instead of fashioning a beautiful partner to embrace, I’d made something ugly enough to conjure up malign and usually suppressed forces of my very home.

I remembered I was scheduled to meet my psychologist shortly (in fact, my appointment was set about a half hour earlier than my internal clock would prefer). The cat lay serene and unbothered; I figured I should be calm as well. I waited. I got tired. I slept. At dawn, I dressed, made coffee, grabbed my camera and went downstairs, determined to document the evil I had unleashed.

The sculpture looked the same as it had the evening before. It wasn’t terrifying, as it had seemed to me in the wee hours.  Looking closely, I noticed a small, dark object inside the ouroborus I’d made. I knew what it was: the tiny, decapitated head of a young mouse. The Demiurge had, indeed, been sleeping next to me all along.

Artist Alexa Horochowski lives in Minneapolis and is Professor of Sculpture at St. Cloud State University. Her work is in collections at the Walker Art Center and Minneapolis Institute of Art. superusted curated by Cheryl Wilgren Clyne, the 4th Midwest Biennial exhibition, at The Soap Factory runs September 12 – November 8 with an opening on September 12, 7- 11 pm. 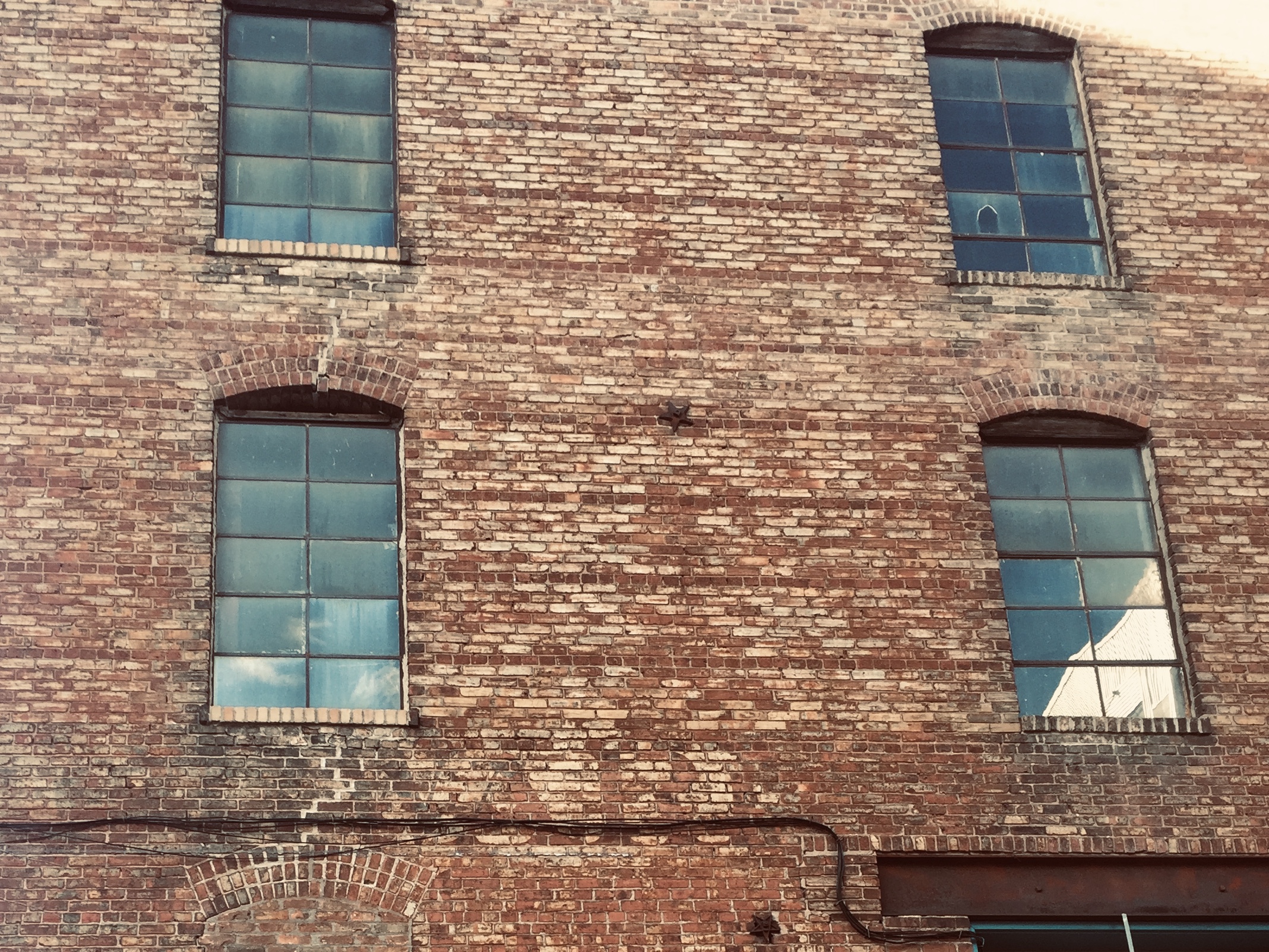