Mary Esch brings her signature drawing style—described by one observer as “nouveau Seuss”—to a series of 12 soft-ground etchings on view at Franklin Art Works. Drawn by Esch and printed by Cole Rogers, a master printer at Highpoint Center for Printmaking, the etchings interpret the Tolstoy story “The Three Questions.”

Like much of Esch’s earlier work, the prints follow a group of travelers as they move through a fantasy landscape and encounter unusual characters. Esch’s distinctive figures often recall the sturdy, somewhat deformed peasants—the “lumpen proletariat”—that populate Northern Renaissance prints. In this series, however, their physical oddities are more restrained.

The protagonist is a queen who desires not to fail at anything and so seeks the answers to three basic questions: what should she do, when, and with whom. In one of the first prints, the queen sets out on a donkey, with two bodyguards in tow, to find a hermit who can answer these questions for her. Unbeknownst to her, she is also being stalked by a man seeking to kill her.

Without text or captions, the black-and-white prints obligingly plot the narrative, illustrating key scenes on the journey. It’s interesting to note which moments Esch has chosen to portray. She’s pushed the stalker to the foreground, for instance, to emphasize his menace and desperation. The wooded landscapes are noted in shorthand, through billowy loops of foliage and forest critters frolicking around the edges.

Shortly after the queen finds the hermit, in the seventh print, her attendants discover the stalker and brutally stab him in the chest while a limber bunny hops casually over a log in the foreground. This nonchalant staging of violence in a sylvan setting winks at fairy tales that also employ disturbing imagery to convey moral instruction (inside the quaint cottage, Grandma is being gobbled by a wolf).

The turning point of the story comes when the queen, discovering the wounded stalker, forgives him and nurses him back to health. In doing so, she realizes that the present moment is the most important time, and the most important duty in life is to alleviate suffering of the person you are with. Clearly, these themes of humility and compassion have religious roots, and Esch’s conscious use of biblical references is called out in an accompanying installation of her preparatory sketches, research notes, and other sources of inspiration for the prints, including a postcard of St. Christopher that serves as a model for the hermit, and several scenes resembling the flight into Egypt.

Esch’s fascination with myths, fairy tales, and archetypal characters is typically filtered through a pleasingly quirky sensibility and imbued with touches of the grotesque. In this series, she has created a fictional time and place characterized by fanciful incongruities. For example, while the queen is dressed in modern style, resembling Mary Tyler Moore in a neat patterned skirt and sleeveless top, her attendants don Asian-inspired sumo loincloths.

These charms, however, aren’t enough to offset the heavy-handed moralizing of the story, which combines with Esch’s spare visual treatment to impart the didactic and somber tone of an instructional booklet. This bland sobriety is overcome, however, in a set of three scenes that are screen printed with color fields. The addition of Matisse-like, amoeboid splotches of color mitigates the literalness of the plain black-and-white prints and plays to Esch’s strength as a colorist. This extra layer adds so much interest that I wished the whole series had been treated the same way.

If you go, don’t forget to check out the bathrooms, which feature a new and permanent installation by Esch. Exploring the “through the looking glass” fantasy, Esch had the bathroom mirrors reverse-etched with exuberant elephants, pirouetting figures with ladders and parasols, and mothers with children, all inhabiting a beautiful icy landscape. 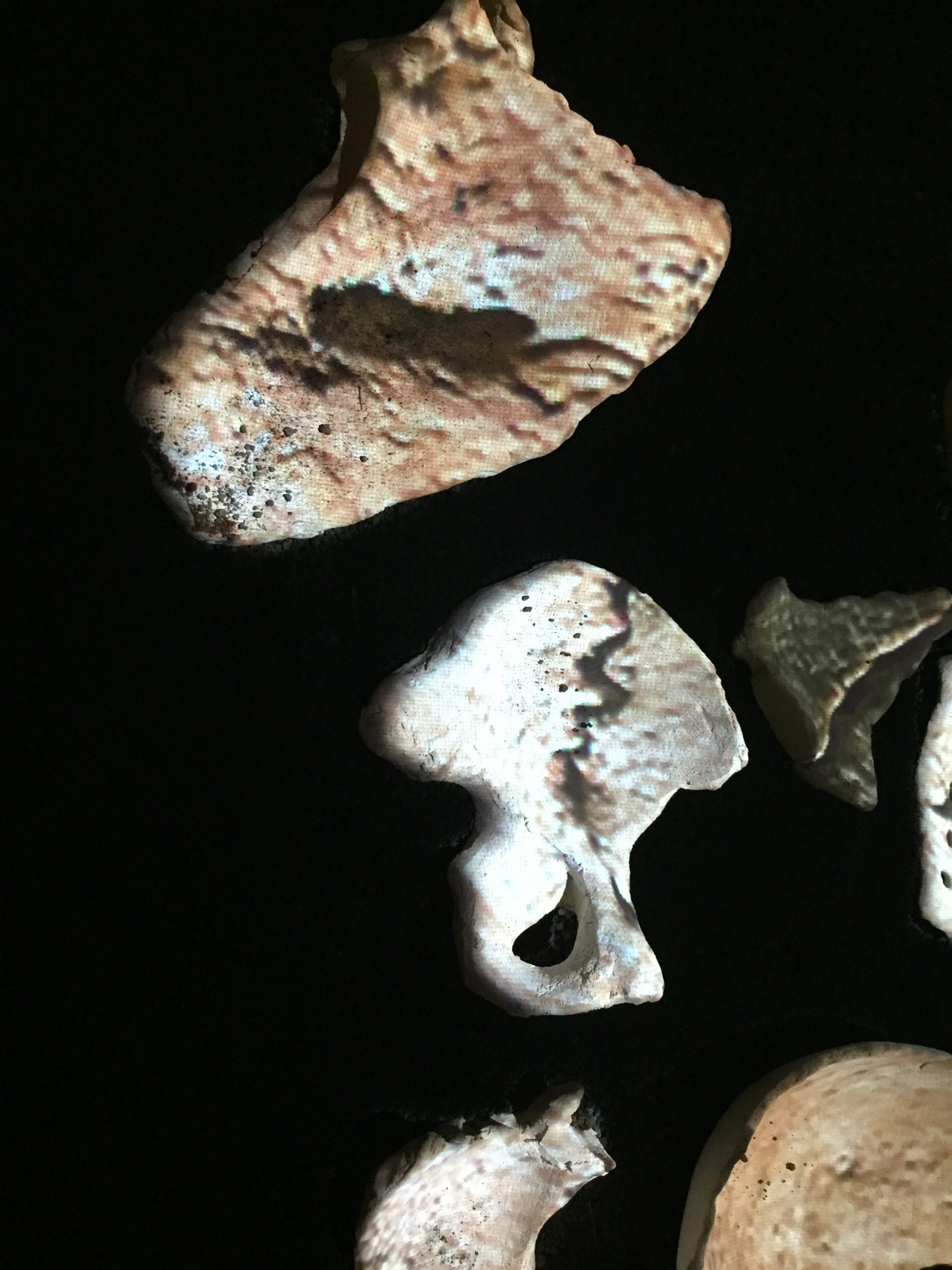 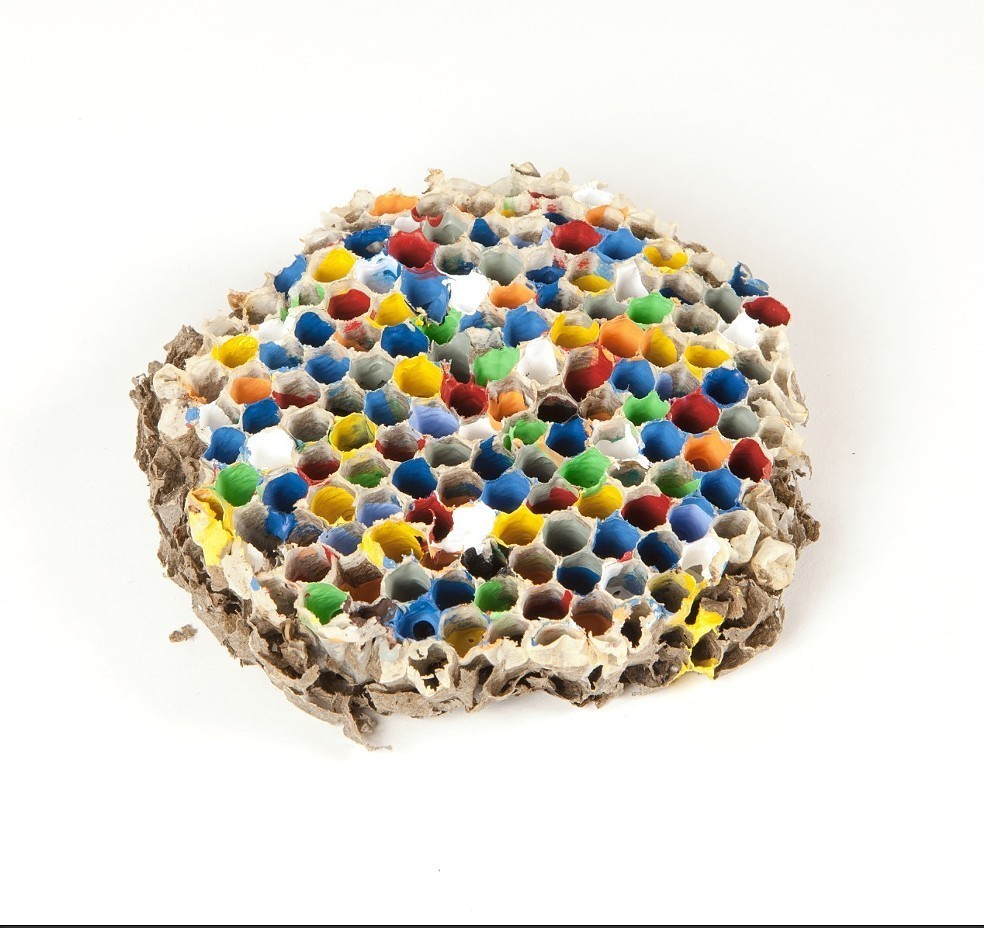 A Pile of Random Sweepings