On the evening of June 12, the Minneapolis Arts Commission, “a volunteer body that oversees the citys public art and promotion of the arts,” invited a panel of arts leaders (from a handful of the city’s most influential arts organizations) to participate in a discussion at the Minneapolis Institute of Arts with the aim of taking stock of “the current state of arts in Minneapolis, and how to move it forward?” The commission’s website describes the night’s agenda as follows: “Minneapolis has enjoyed an arts explosion in the last few years, but how do we use that momentum and continue to build Minneapolis reputation as a leader on the national arts scene?” mnartists.org asked arts administrator and critic Michael Fallon to attend the event and report back with his impressions on the evening’s conversation.

IF YOU HAPPENED TO MISS THE FIRST FIFTEEN MINUTES of the recent panel discussion on Minneapolis artistic future, sponsored by the Minneapolis Arts Commission, you didnt miss much. In what best can be described as an excruciating exercise of intensive local arts spin, early attendees to the event were treated to a host of thought-terminating clichés from Minneapolis City Council President Barbara Johnson and from representatives of the Walker Art Center, the Minneapolis Institute of Arts, the Minnesota Orchestra, Loft Literary Center, Guthrie Theater, and McKnight Foundation.

Just to give a taste, the event began with a vague (somewhat desperate-sounding) appeal from Johnson to the scattered 65 or 70 audience members: Please know the city views the arts as an essential part and great promoter of our community. The panelists then unanimously echoed their convictions about the significance of the local arts community. Were in great shape, said Jennifer Komar Olivarez, an associate curator at the MIA (filling in for the previously planned speaker, the Institute’s new director Kaywin Feldman). Compared to other cities, Minneapolis is very impressive in terms of art, agreed Philippe Vergne, chief curator at the Walker Art Center.

And thus followed a succession of many of the same, shop-worn old saws that local arts advocates are prone to tossing off (usually without supporting statistical proof) when asked about the arts here. This is just a sampling of the glib, oft-repeated claims that were reiterated in the night’s opening remarks: Minneapolis is the most literate city in America, has the most theater tickets sold per capita outside of Broadway and the widest array of artist service organizations in the country, not to mention the deepest sources of philanthropic support of the arts anywhere.

It would be a fine thing if the vaunted art-city status that Minneapolis grants itself were provably true, and if the lip-service served up regarding support for local arts actually had the solid basis in fact that people claim. Unfortunately, the truth, as it can be empirically shown, is less sunshiny than Im guessing any of the evening’s panelists are willing to admit. Minneapolisunlike many cities around the country (including its neighbor, Saint Paul) and, notably, unlike most other cities with a reputation for arts friendlinessactually provides little practical support to the arts. Minneapolis offers almost no city funding to arts organizations and artists (beyond the requisite occasional public art project) and has no staff dedicated to overseeing arts development or planning. But, as was not the case with the optimistic spin offered up at the recent panel discussion, you dont have to take my word for it. This bleak assessment of the lack of practical arts support by the city of Minneapolis actually comes from scholar and economist Ann Markusen, author of a national study investigating how various cities support the arts. Heres what Markusen uncovered about Minneapolis in her 2006 paper, Cultural Planning and the Creative City:

In Minneapolis  the City Council abolished its Department of
Cultural Affairs in the 1990s, leaving only a small Office of Cultural
Affairs with responsibility for public art and publicly supported arts
programming, moved under the umbrella Community Planning and
Economic Development Department. There is also a separate City of
Minneapolis Arts Commission, but it has few powers and little
political clout, and is in general ignored by the more powerful arts
institutions in the City [this has important ramifications, as explained
below]. Cultural affairs departments and offices have suffered
relative resource losses in recent decades as taxpayer revolts and
higher priority placed on everything from public safety to
economic development have squeezed their shares of the public purse.

Markusen further explodes the myth of Minneapolis abundant arts support through a point-by-point comparison of urban arts policies around the nation. As opposed to the other, more truly arts-friendly citiesLos Angeles, Seattle, San Francisco, and several othersrevealed by Markusen’s research, Minneapolis has no dedicated arts funds to support local arts activities, no central planning mechanism or agency to manage arts development activities around the city or region, and there is little sympathy for the arts reflected in urban planning and economic development initiatives. It’s telling that, unlike what you’ll find in some cities, for the City of Minneapolis, cultural policy has little standing. There are few formal avenues for interaction between arts organizations or artists and city planning departments with regard to the management of land use or the citys zoning laws, which do not permit the mixing of commercial and residential use. Such restrictive policies about urban zoning make it needlessly difficult for artists and small organizations to survive in the region; specifically, these sorts of policies tend, over time, to foil artists’ and small arts organizations’ attempts to create affordable live/work spaces. Further, Markusen explains, in Minneapolis, it appears that larger arts and cultural institutions have garnered the lion’s share of city commitments in terms of land, parking garages, and support from state bonding funds. Generally, allocating such a large proportion of civic resources to a few big arts institutions further leaves small organizations, neighborhood arts centers, and individual artists out in the cold. (It is important to point out here that the bulk of the panelists work for just such large organizations which have been among the few beneficiaries of the citys narrow arts policies, and that may help explain their allegiance to the group-think about local arts.)

If you are beginning to feel your blood pressure rise upon reading all of this, you will begin to get a sense of how I was feeling after the first round of statements by the panel. Fortunately for my health and yours, however, it was at that precise moment that the panel moderator, Fox 9 news anchor Robyne Robinson, stepped in to begin directing panelists toward a more measured assessment and constructive discussion about how the city is doing regarding the arts. We can sit here and repeat over and over how great things are, Robinson said, but then you hear these constant complaints from artists. If things are great, why is the discontent there? Do we just have too many artists and are unable to feed everyone?

McKnight Foundation program director for the arts, Vickie Bensons response to this questionvoicing her particular concern about the well-being of individual artists locallyrepresented the first genuine moment of the night, and her remarks elicited an outburst of loud applause from the audience. We cant forget, Benson said, about the artists who live with poverty, who have no health insurance, and who face a lack of retirement money. We cant forget about the artists who bring so much vibrancy to our community.

Other panelists, at first, werent quite so willing to immediately validate the local artists’ disgruntlement. We cannot please everybody, said Philippe Vergne, slightly testily. We make choices and, by nature, this is discriminating. Discontent of this sort is not just present in Minneapolis. It happens in L.A., it happens in New York. It is in the nature of what we do. Desire is important. We need desire or art dies. Jennifer Komar Olivarez of the MIA agreed: If you look at the broader picture, our role is to set a certain standard, a bar for local artists to aspire to. We cant be everything to everybody. Still, Robinson, to her credit, persisted in asking about the city’s role in supporting smaller organizations and individual artists. She kept dancing around this point throughout the next hour or so of discussion, digging for a more human, more specific response, asking for panelists’ assessments of the current state of affairs which might go beyond feel-good spin. And, as a result, over the course of the evening the discussion grew increasingly realistic about the state of the arts in Minneapolis and about its immediate prospects in the current times and near future.

In short order, Robinson asked whether there were inflated expectations for large Minneapolis arts organizations as a consequence of the hundreds of millions of dollars’ worth of expansion many of them have undergone in the past five years. (Some panelists admitted there has, indeed, been some tension and growing pains in the wake of recent redevelopment.) Robinson also asked about the potential for large locally-based businesseswhich have given tons of corporate money to support these expansionsto exert undue influence on arts programming at the organizations on the receiving end of their largesse. (Most panelists sidestepped the question, instead arguing about the relative merits of blockbuster shows. I feel compelled to point out here that I suggested evidence of such corporate influence on arts programming was already beginning to emerge in an essay I wrote more than two years ago.) Robinsonagain, to her creditpressed the point, asking if the panelists’ organizations ever worry about selling out in the wake of their recent expansions (which the panelists again, for the most part, side-stepped). Then, she followed up with a question about whether the small organizations in town have suffered from competition with the large institutions (ole!).

As the discussion progressed toward its conclusion, and these expert panelists became less and less able to answer the hard questions about the struggles of the larger art community in Minneapolis, I could tell that Robinson was beginning to circle the truth. When she asked about the financial challenges facing the arts community in the current economy and, specifically, about whether the big organizations had contingency plans to deal with the difficult fiscal realities of the times, the panelists allto a persongave grudging nods. We talk a lot about it, admitted Vergne. Its a very constraining moment. Weve been much fatter in the past, but at the moment we are on Weight Watchers. The other panelists spoke about the various ways that their organizations have been readjusting their activities to cope with declining support and increased costs, even as they grapple with the high expectations that a tapped art public has for these highly visible (and expensive) institutions. Then Vergne continued: We have to change the way we operate and change our rules of engagement. If we dont, we become dinosaurs and die.

And so, the curtain had at last been lifted, revealing a reality beyond our blind faith in the regions art supremacy. Now, perhaps, a real discussion can begin.

About the author: Michael Fallon is an arts writer, arts administrator, and educator based in Saint Paul, Minnesota. Michael has an MFA degree in book arts from the University of Alabama and an MA in arts management from Carnegie Mellon University. Since 1998, he has written more than 160 reviews, feature articles, essays, and profiles for publications like City Pages, Art Papers, The Orange County Weekly, Saint Paul Pioneer Press, The Pittsburgh City Paper, Fiberarts, Public Art Review, and Art in America. Michael has been a member of the American chapter of the International Art Critics Association since 2000, and in 2002 he founded a local arts writers association, the Visual Art Critics Union of Minnesota (VACUM). 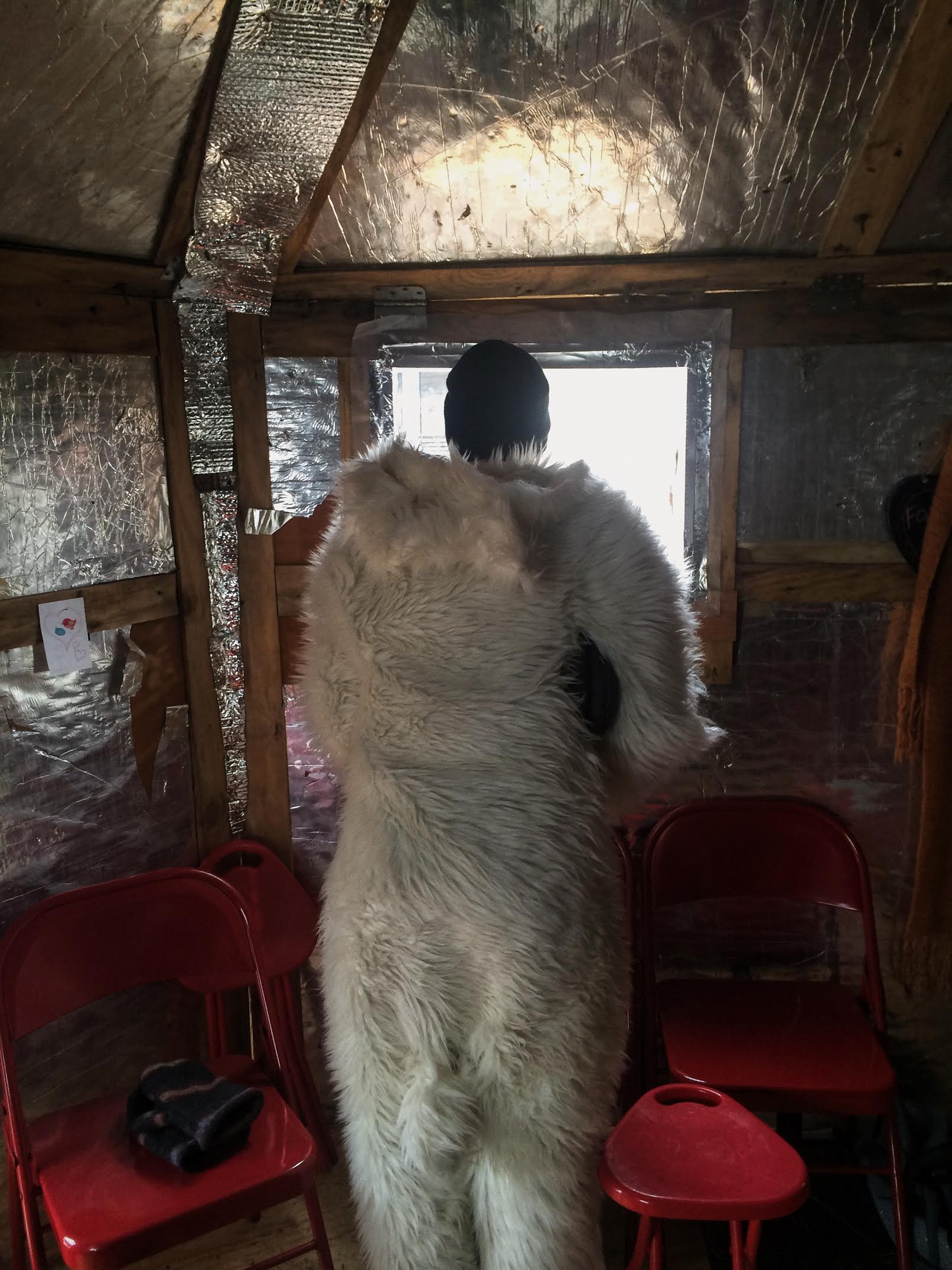